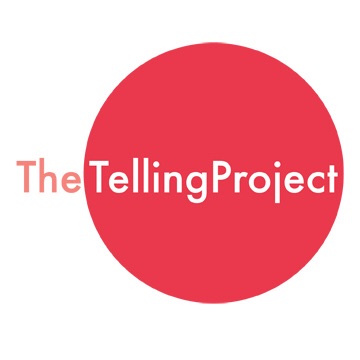 On the day before Veteran’s Day, I saw a performance of “The Telling,” a national platform for veterans to describe their experience, and for civilians to experience that with them. With an audience of about a hundred, I had the privilege of listening to four US veterans become utterly vulnerable in front of me. Their bravery on stage was astounding. War was not glamorized, tragedy was not over-enunciated, and no over-arching agenda was advanced. Instead, three men and one woman allowed themselves to speak with honesty about the daily facts of life at war: laundry, hauling, drinking, painting, sexism, anger, and fear. They were able to talk about the impact of witnessing trauma on their relationships. They spoke about wanting to die. Some of them said they were still grappling with their pain, still finding themselves screaming at night, finding it still difficult to cope or to let themselves feel.

I was reminded of the idea that touching and being touched are the two most important activities of health. Touching others – telling stories, sharing selves, in ways little and big – was cited by two of the veterans on stage as the thing that kept them sane. “I’m not here for you,” one told the audience; “I’m here because this is the thing that is keeping me alive.” Another agreed, and said that years after combat, finding himself able to start to tell parts of his story to friends was revelatory for him. Finding connection and feeling safe and heard is fundamental and foundational.

I have a friend who served, and he’s told me that when recruits enter the military, there’s a long and exacting socialization process. (We call this “boot camp.”) When leaving the military, however, there’s no formal process for re-entering civilian life. We all know about increased rates of addiction among veterans; we’ve all heard stories about how difficult it is to re-align without having the structure, expectations, and role that one had in the military.

Finding therapy can be extremely difficult for veterans due to both the stigma around asking for help and the fact that getting help through the VA can take months. How much easier would it be for the military to provide new veterans the space to de-brief, complain, voice fears, and tell their stories? I think about the years that some have to wade through before being forced into treatment by their partners or employers, and it doesn’t make sense to me. We should be providing more coordination and care to those that chose to serve their country.

Any action is often better than no action, especially if you have been stuck in an unhappy situation for a long time.

If it is a mistake, at least you learn something, in which case it's no longer a mistake.

If you remain stuck, you learn nothing.